Upon reaching the Malawi/Tanzanian border, my Blackberry jumped to life with a request to visit a potential site for a new Peace Corps Volunteer (PCV) and to stop by to say “hi” to some current ones. My husband and I were just returning from a road trip that took us snaking through Zambia and Malawi and were heading back home to Dar es Salaam. Visiting Volunteers is one of the highlights of my job with Peace Corps Tanzania.

Near the potential environmental volunteer’s site, the fields along the road were barren and lined with bags of charcoal. I found my head shaking a silent “no” in continued disbelief at the deforestation of Tanzania. More than one million acres of forest are cut each year, and Kilimanjaro has lost 82 percent of its snow coverage since 1912; once-lush forests are now dry and dusty fields. Water has become the foremost topic of discussion when we bring Volunteers together. One woman made a presentation after her first three months at site where she flashed photos of young students struggling up the hills in her region with water balanced on their heads. She concluded with tears in her eyes and implored her fellow Volunteers to tell her how she could help. 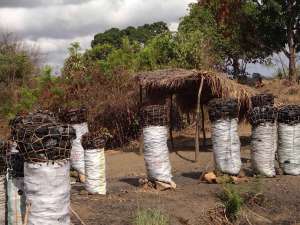 On another day, a young man came into my office with a shaggy beard and a rather strong odor clinging to his clothes. I teased him about the state of his cleanliness, and he sincerely told me that he didn’t have enough water to wash properly. Water had to be trucked to his village, and he lived on less than a gallon a day for drinking, cooking and washing. When I asked him why a village would settle in an area with so little access to water, he looked incredulous. “There used to be plenty of water with a stream running through the village; this is the result of the change of the climate.” He went on to discuss the trees that were cut down by the villagers to make charcoal and said that this had impacted the rain in the area.

The barren fields dotted with scrub trees and stumps continued to serve as the backdrop for the bags of charcoal artfully placed next to the road. In many places, the earth was scorched with recent fires from the production of locally-produced bricks of charcoal. As usual, I was torn, since I know that locals need bricks (that are fired with wood) for durable houses and not just mud that will melt with the annual rains. Charcoal is one product that they are able to produce and sell. Hopeful children ran out from behind the charcoal waving to attract our attention, and semi trucks were pulled over while drivers haggled with the vendors before loading bags of charcoal behind their cabs. We are never sure if they are taking these bags home or selling them when they reach Dar es Salaam. With the country’s exploding population, Dar is the largest city and a magnet for people in their search to find work. And of course, they must eat; anytime, day or night, groups can be seen squatting on the ground near small fires while women roll out flat breads and fry up food for sale. Spontaneous food vendors are everywhere, and they are all using charcoal. 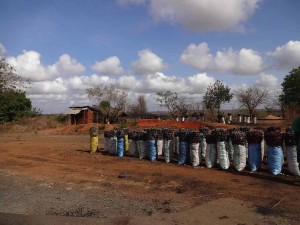 Charcoal is the number one choice for cooking fuel since kerosene prices recently jumped by 65 percent to a price out of reach for many locals. Kerosene is often used for lanterns as well as cooking, but it can also be used to dilute petrol and create a larger profit for gas stations, making every trip to the petrol station a form of Russian roulette: You never knew when you would get a tankful of bad gas. As a result, the government dictated that kerosene prices must be raised to higher than or equal to petrol. One friend of ours was on a road trip with his family when he purchased bad fuel and was stranded 12 hours away from Dar. He had to cancel the remainder of his trip and was forced to fly his family home. It took him months to buy parts and find a qualified mechanic to repair his vehicle. The raising of the kerosene prices nationally did help solve the adulteration of fuel problem, but negatively impacted everyone who used kerosene legitimately and cemented the use of charcoal as the mainstay of cooking fuel.

When we turned off the main road toward the village in which we hoped to place the Peace Corps Volunteer, we bumped onto a dirt trail lined with a small grove of recently planted trees. The road turned sharply at the end of the grove, and a small woman came out to greet us. She is a member of the village, and as we walked to the house they had prepared for the Volunteer, she explained how the last Volunteer had made a project of planting trees and that the villagers understood the need to continue. This PCV showed them how to grow the seeds in a nursery and then transplant the trees when they were large enough to survive. The grove of trees was just a small start, but it was a thriving example that the land could be reclaimed and reforested. The villagers are now enthusiastic about planting trees. The villager went on to talk about new projects to plant more trees of varying species. The excitement in her eyes was contagious.

When planting, it is important to choose carefully trees that will thrive easily. One such tree that has proven to be almost a miracle is the moringa. It is fast growing and can be planted either by seed or by cuttings, and even in poor soil it will flower within eight months. The leaves of this tree are reputed to have seven times the vitamin C of oranges, four times the vitamin A of carrots, four times the calcium of milk, three times the potassium of bananas, and two times the protein of yogurt. Moringa trees also provide much needed fodder and shade for animals. In addition to planting trees, Peace Corps Tanzania teaches perma-gardening techniques and supports the Volunteers in engaging villagers in these endeavors.

As we pulled back on the main road, we started noticing several other encouraging signs of sustainable forestry: small plots of land with rows of trees newly planted and, perhaps ironically, a car with the logo of a non-governmental organization (NGO) dedicated to planting trees prominently displayed on the spare tire cover. Hours passed as we crawled through the mountains behind slow trucks and into the plains that crossed through Mikumi National Park. Once inside the park, a group of elephants walked silently next to the road, while a giraffe could be seen silhouetted on the horizon.  Watching the wildlife as we passed through the park on the highway went a long way to helping us forget about the destruction of the natural beauty of Tanzania. But the trees stopped abruptly at the park boundary, and the rows of charcoal vendors started just as quickly. I had to wonder, though, from where the trees for the charcoal had come; the land looked like it had been stripped bare many years ago. Could it be that the locals were sneaking into the park and starting to harvest those trees? We couldn’t be sure, but just the thought that the animals that found refuge in Mikumi could be losing this small patch of wilderness, too, was sobering.

There are several NGOs working in Tanzania that focus on reforestation. Trees for the Future is one of these organizations and has gotten traction with Peace Corps Volunteers. They provide seeds and training to the PCVs and their Tanzanian counterparts. They, along with other organizations, are working to reverse the trend that has stripped Tanzania of its trees. Hopefully with attention and patience, the tide will turn and the trees will return.