The Crow that Knows Us

The American crows in my Seattle neighborhood recognize me. I know this because they follow me, call when they see me, and peer at me through my window. They know me, because I have fed them before. Of course, the idea that they recognize me is a supposition, I do not have proof they know me. However, I’m not alone in believing the crows recognize me. Other people, such as Gabi Mann, the Seattle girl who has received many gifts from crows, believe themselves to be known by crows. In both of our cases, our supposition is backed up by research.

Work by Dr. John Marzluff and his collaborators in Seattle demonstrates that wild American crows can and do recognize human faces, acting on their memories of prior interactions with these people. Furthermore, their work shows that individual crows act on information they receive about these people even if in the absence of direct experience; in other words, they act based on what other crows have communicated to them about these particular people.

The implications of these results, while consistent with my and a great many others’ experience, are unsettling to our culturally ingrained anthropocentric views of the world. What does it mean if the wild creatures around us know us as individuals and respond to our behavior, telling each other whether we are generous (offering food) or dangerous (likely to trap or shoot)? Certainly it upends the idea that we are more sophisticated in our knowledge of them than they are of us. The only way I can recognize a crow is if that bird is banded or perhaps has white feathers or an injury; the crows seem to have no problem recognizing me without my wearing any sort of tags.

The work of Marzluff and colleagues looks specifically at the relationship between humans and crows in urban areas. As the type of ecosystem most profoundly impacted by anthropic forces, urban areas can provide us with a clear sense of how human behavior affects the behavior of other species. Human behavior within these ecosystems is a force of natural selection; individuals better able to perceive and predict human behavior are more likely to survive, thrive, and reproduce than individuals less ability to interpret human behavior. Therefore, over time, urban areas might be expected to be host to ever increasing numbers of other animals all able to know us, and predict what we will do next. 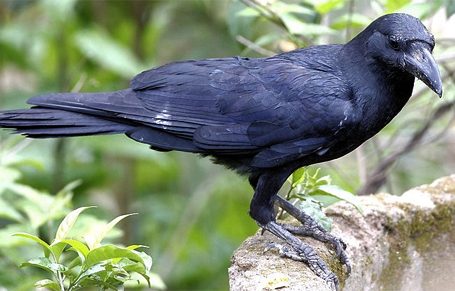 It is only recently that scientists have started studying the ecology of the city, despite the urban environment’s likely unique impacts on biodiversity. Our ignorance of the way the city functions as an ecological and evolutionary system fosters our lack of awareness of the complex and dynamic responses of other species to our presence. Crows are an urban opportunist and do well in areas affected by people. While this might at first seem a reason to focus our attention towards species that are threatened or endangered, understanding how they respond to the behavior of humans can provide us a sense of the ways human activities potentially affect the behavior of other corvids, other birds, and other urban animal species in general. Also, insight into the world of the birds that live right next door to us serves to deeply enrichen our own experience of the city.

In their work to document facial recognition and behavioral response in crows, the Marzluff lab focused on exploring the relationship between trapping a crow and being recognized (and mobbed) later by that crow. To do this, researchers wore caveman masks while trapping, banding and releasing crows on the UW campus. Later, other students put on the masks and walked the campus, taking notes on crow behavior. A control mask, Dick Cheney, was also worn by people walking around the campus. Banded and unbanded crows responded by scolding anyone wearing the caveman mask while, at the same time, ignoring the Dick Cheney mask. Future masks were created to be more lifelike, based on actual individual people rather than caricatures, and the results were the same. Crows recognize human faces. They even recognize them when the mask is upside down.

Over several years of data collection, it became clear that information about dangerous humans was passing both horizontally among adult crows and vertically between adults and their fledgling young. Unbanded adults who had never been trapped scolded mask-wearing individuals. Fledglings watched their parents scold and later scolded those faces they now recognized as a threat themselves. This community-wide recognition lasts. Crows were still responding aggressively to the dangerous masks more than two and a half years after the original birds were captured.

While crows in different regions of Washington showed the ability to recognize people, the level of response they exhibit appears to depend on whether humans are more or less generally threatening.  Crows in urban Seattle, where they are generally tolerated, show a greater level of aggressiveness toward people wearing threatening masks, than do crows in a relatively rural Washington site bordered by areas where crows are regularly hunted.

For all of these birds, it is likely that a very specific neurosensory pathway directs their perception of these faces. Marzluff and Colleagues at UW School of Medicine used positron emission tomography scans (PET scans) to determine the brain activity of crows exposed to threatening and caring masks.  They discovered that in crows the response to the vision of a threatening face is translated through a very specific neurosensory pathway; this pathway is different than that activated by a caring face (the mask worn by those who fed the crows while they were in captivity for the study).

While the research on recognition and aversion is now extensive, there has been less research into the relationship between caring behavior and crow recognition and cultural communication. However, there are a number of anecdotes of crows recognizing people with whom they have positive interactions, not least of which are the gifts that people, such as Gabi Mann, receive from these birds. Marzluff, in the book he co-wrote with the artist Tony Angell, Gifts of the Crow, documents these episodes of apparent gifting behavior, from the delivery of a candy heart to a necklace bead to a key. 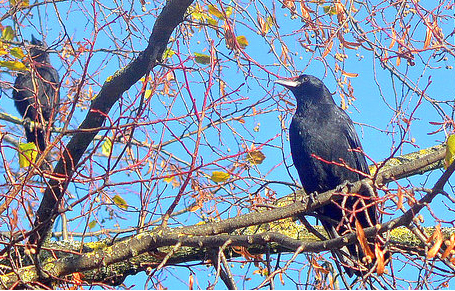 In examining the incidents of gifting, Marzluff and Angel conclude that “gifting is real.”  They also note the two hypothesis that might explain this behavior; one is that it is accidental. A crow may be carrying an object and drop it in order to pick of up a higher value food item. Alternatively, gifting is intentional. Crows give gifts to people for the same reasons people give gifts to each other, as a form of connection and reciprocity. This is the hypothesis that drives the internet excitement over Gabi Mann’s gifts. It is an awesome thing to imagine that the crows are acting to connect with us. However, the implication of this level of recognition and intentional interaction between wild birds and humans is also profound.

This work with crows is extensive and progresses hand in hand with the study of corvid cognition. To some extent, the ability of various corvid species to recognize humans is less surprising since we know that corvids are complex social beings with, at least in some species, the ability to create and use tools. They are, however, not the only wild avian species to recognize human faces. Wild Northern mockingbirds recognize potentially threatening people. Pigeons recognize the faces of people who feed them and know, based on past experience, whether that human is more or less likely to bother them while they are eating. It seems the crows who know us are just the tip of the iceberg in the urban ecosystem; our perception of existing in our isolated human biome, assuming only our pets know us, is one likely to crumble as we learn more about how the species we engage with every day know us and change their behavior to respond to us.

The lead photo is copyright protected and may not be reproduced without permission. Courtesy of Mary Bailey. The second and third photos are creative commons, courtesy of Micolo J. and Lee Kip. Some restrictions apply.