The Delicate Balance of Species Dependence 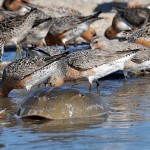 What do horseshoe crabs, and red knots have in common? Survival.  Two different, but vital, annual migrations bring these animals together every year. Both are fighting to survive.

The red knot is a shorebird known for it’s brilliant, rusty red breast feathers and patterned black, grey, and white plumage. Although small and delicate, these birds show astonishing strength and endurance each year as they make the 9,000-mile trip from the tip of South America to the Canadian Arctic.

However,  without a stopover in New Jersey’s Delaware Bay to feast on horseshoe eggs , these birds would not have enough fuel to make their long migration.  But this rich food source is dependent on the simultaneous migration of horseshoe crabs to the shoreline to mate, and spawn.  After the red knots have eaten their fill of the fatty horseshoe eggs  they have doubled in weight and gained the strength to continue their migration. 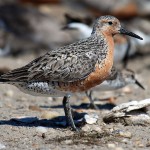 Unfortunately, the numbers of birds making this trip each year has plummeted due to the decreasing levels of crabs available for them to feed on. These falling numbers have caused the State of New Jersey to list the red knot as an endangered species.

Scientists studying shorebird migrations and populations warn that if humans do not work to protect the horseshoe crabs along our coasts, both the crabs and the red knots may become extinct.

It is clear that the fate of these unique birds depends on a healthy horseshoe crab.  Because of the same eggs the red knots depend on,  horseshoe crabs have fallen victim to overfishing.  The eggs carried by female crabs contain a protein effective at  attracting eels and whelk, making horseshoe crabs the bait of choice for catching either species. As a result, the horseshoe crab population has fallen by over 80% since 1990. 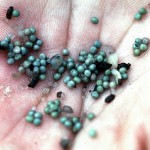 Horseshoe crabs are also heavily utilized by pharmaceutical companies who use their copper-rich blood to test for bacterial contamination in drugs and devices. Although they are returned to the water after testing, 5 to 30% of the crabs die.

New Jersey has taken steps to protect horseshoe crabs by creating harvesting limits, but the crab populations will continue to decline until other states also adopt these limits. In addition, the pharmaceutical companies must implement better oversight and management practices.  All of these actions need to happen quickly.

“The recovery of the birds can’t really start until there are more crabs,” said Lawrence J. Niles, a biologist 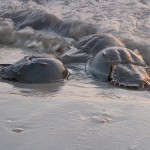 with Conserve Wildlife Foundation of New Jersey and a former official with the State Department of Environmental Protection as quoted by the New York Times. “We can’t wait decades. We need more crab eggs now.”

Original article can be found here:

A Bird, a Crab and a Shared Fight to Survive

Additional articles and links can be found here:

Many Horseshoe Crabs and Birds on Delaware Bay

Crash: A Tale of Two Species

Shoring Up the Red Knot: Conservationists Rush to Save a Bird on the Brink