The Disappearing Rainforests of Kagoro 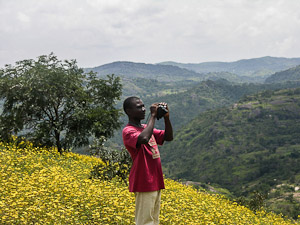 I remember looking out of the rear seat window of the Volkswagen at the round, white moon, barely visible through the thick, tall trees that formed a canopy over the narrow, twisting dipping road to Kagoro. I bumped along, imagining all the adventure to be had. The sudden change in vegetation from sparsely-growing trees and shrubs at the roadside to a tunnel of branches and leaves, a tropical rain forest on the shoulder of the mountain, always reminded me that we were nearly there.

Kagoro is collection of villages, some merged into towns, nestled at the base of the Kagoro hills in the very center of Nigeria. The Kagoro forest is found in the north-western Nigerian state of Kaduna on the windward side of a plateau. Although found in the Sudan savannah region of the country, the area receives 1550 mm of rainfall annually; the rainfall provides the foundation for the unique mixture of rainforest and savannah found in Kagoro. The peoples that currently live in this area have a long history dating long before the Jihad that swept through most of northern Nigeria from 1785-1898; it remains a thing of pride to the people of Kagoro that the Jihadists never conquered their land.

During the Jihad wars, scouts would alert the Kagoro villagers when the enemy was sighted and everyone would run through the forest and into the mountains to hide in sacred caves. Try as they might, the Jihadists found only empty villages as they pushed through the countryside. As children, we used to beg to be shown the caves, but would be told that the passages to the caves were a closely kept secret and known only to only a select few. Those secrets protected the Kagoro people.

This trip into the mountains was an annual one my sisters and I looked forward to with a lot of excitement and anticipation. The mood in the car when passing through the forest to the village was always one of awe as we silently recalled the stories we knew all too well of our great-grand mother and the python. 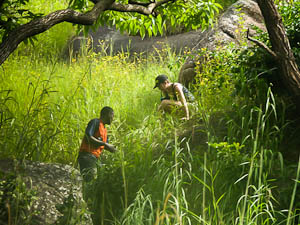 Back in the old days, the major source of income for women and some families in Kagoro was gathering and selling firewood, the major source of fuel for cooking. Kerosene was too expensive, and only a few could afford it. Once the chores were completed in the morning, village women would head into the forest to gather firewood for the evening and morning meals. When they were able to gather extra, they would barter or sell it to other families. Gathering firewood was usually a task for the women of the house, from the oldest to the youngest, provided they were able to hoist the bundles and walk for several kilometres. My great-grandmother, grandmother, mother and aunties followed this routine almost every day.

As the population increased and more people sought firewood to sell and cook, the harder it was to find wood close to the village and gatherers had to go further and further into the forests. This was done only by the bold and strong. My great granny was one of such woman. One day, when the women had all gathered as much as they could find, my great granny asked my mom, granny and aunties to return home while she went on to look for more wood. While using her machete to dislodge a dead branch, she felt the soft and bouncy forest floor move. Looking down, she found she was standing on a large python that had been hiding beneath the fallen leaves and twigs of the forest floor. 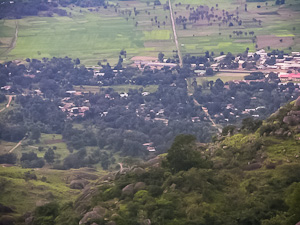 Soon, as she returned home from the forest, walking along the narrow village streets, a few people noticed that her basket was full of something other than firewood; before long, there was a small crowd following her. When she finally set down her basket in the middle of the compound, some ran in fear while others stood looking in awe at the woman and the python that could easily have killed her instead. My mom told me that night they all ate more meat than they ever had before.

The annual end-of-year trip to Kagoro was an opportunity for families to meet, discuss and find collective solutions to village and family problems. The trip also coincided with the Afan National festival, presided over by the then oldest living monarch in Nigeria (who died in 2008 after serving for 63 years). As we all got older and more Westernised, parents were not able to convince children to come on this annual pilgrimage as often; at one point, I was away for nine years without visiting.

As the villages grew and became more developed, they began to have a larger impact on the flora and fauna of the forest. An increasing population meant there was a greater demand for fuel; since most could not afford kerosene and cooking gas, it meant more trees needed to be harvested. Loose government regulation and enforcement also allowed logging on an industrial scale in the forest reserve. By 2007, when I returned to the Kagoro area to work, I was in awe, this time not by the mystery and magnificence of the forest but by how much of it was missing. A study in 2010 on changes to the Kagoro Forest has shown that at least 24 percent of the forest was lost between 1987 and 2005.i

Driving along the twisty dipping roads is not the same anymore and will never be, not in my lifetime, at least. Gone are the massive trees that formed a canopy over the road, gone are the monkeys scurrying across the road. Gone is the way of life of a people, gone are the dreams and memories of many generations.

Photos are copyright protected and may not be used without permission. All photos are courtesy of Bala Dada.