The Extinction of the Tasmanian Tiger 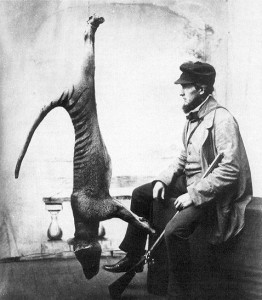 The last known wild Tasmanian tiger (thylacine) was shot in 1930, and the last thylacine in captivity died six years later in the Hobart Zoo. The Tasmanian tiger was officially declared extinct in 1986, although sightings of the animal are reported every year. Unfortunately, no proof of living thylacines has come forth. Today only bones, fossils, and a few photographs and short videos remain of the Tasmanian tiger.

The Tasmanian tiger was an odd creature, with the head of a dog, the stripes of a tiger, the pouch of a water opossum and the hind legs of a kangaroo. The thylacine was the largest meat-eating marsupial and had the ability to hop on its back legs like a kangaroo.

Why did it become extinct?

Humans. The primary factor cited for driving the Tasmanian tiger to extinction is human hunting of the creatures. They were erroneously seen as pests and varmints by settlers and farmers, so bounties were placed on the animal’s head. A dead adult thylacine fetched £1 (approximately £43, or $68 today) while a dead pup was worth 10 shillings (or about  £22. or $34 today).

Humans were also indirectly responsible for many other factors that contributed to the Tasmanian tiger’s extinction such as the introduction of dogs and a disease, human encroachment on their habitat, and a decline in prey.

Although the thylacine’s common name is Tasmanian tiger or Tasmanian wolf, the animal’s range once included mainland Australia and New Guinea before it was driven to extinction by humans.

We humans would be wise to learn from our mistakes and try to avoid repeating them.

Video footage of the last Tasmanian tiger in captivity:

Compilation of all known videos of the Tasmanian tiger: