The First Sumatran Rhino to be Born in Captivity in Indonesia

Last Saturday, June 23, 2012, at the Sumatran Rhino Sanctuary in Way Kambas National Park, the female rhino Ratu gave birth to a baby male after a 16-month gestation period. The baby rhino was named Andatu, a combination of its parent’s names. 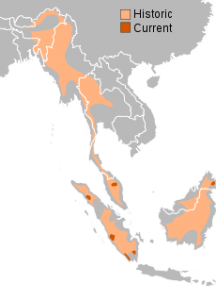 Sumatran Rhinos, the smalles in the rhino family, once roamed all over Southeast Asia – from India and Bangladesh to Thailand and China.  Now the species is confined to small regions of Sumatra, Borneo and the Malay Peninsula, and as few as 200 rhinos are left in the wild. Currently Sumatran rhinos are listed as critically endangered by the IUCN.

Photo courtesy of Wikimedia Commons and created by JayHenry