The Kgalagadi Transfrontier Park straddles the Nossob River, which is the border between South Africa and Botswana in central southern Africa. The South African part of the park was previously known as the Kalahari Gemsbok Park.

It is a beautiful drive southeast from Windhoek to Stampriet on the Auob River. The rolling red Kalahari sand dunes are a spectacle, and this year, after heavy rains over the Easter weekend, they were covered in waving silky grasses and wild flowers. Massive camel thorn trees and scrubby grey camel thorns mark the river bed, their pods lying in piles under their stately crowns. The local people were hard at work collecting pods in huge sacks, as they make very good fodder for their cattle and horses.

We roller-coasted over the red dunes, down the river course that sadly has been encroached upon by exotic prosopis trees. Some farmers have begun clearing the trees and are making charcoal on site from the wood, but there is so much potential labor-intensive work required to get rid of this water-devouring pest. Farmers along the river make use of the abundant artesian water to grow vegetables to supply to Windhoek, the capital of Namibia. Goats and sheep flourish in this environment, and, in a good year such as this, cattle also do well. Dotted along the river course are the graves of German Schutztruppe (soldiers) who died in the skirmishes of 1904-1906 with the local Nama and Herero people, who were driven out of their traditional pastures by European colonization. It was here that we entered the Kgalagadi Transfrontier Park at the Mata Mata border post into South Africa.

Just a few kilometers down the road on the way to our first overnight stop, we came across a pride of very languid lions blocking the road at a watering hole. They had just fed, and the white-backed vultures were circling overhead and perching in the surrounding trees, waiting for their chance to join the feast. The lions lounged around and eventually raised themselves to drink, lazily lapping at the clear water. They all jumped to the clean, cool pool, only managing to launch themselves after many warm-up attempts, as their bellies were so full.

We followed the Auob River southward to get to Kieliekrankie Camp, situated high on the red dunes, overlooking the vast emptiness of the Kalahari. As we arrived, two bat-eared foxes raced off over the dunes in their usual hurry, and we settled in to watch the stunning African sunset. Early the next morning, we saw four spotted hyena loping off for breakfast after spending a restful night in our parking lot.

Heading off on our day’s travels, we crossed to the east over the dunes to join the Nossob River, which is the border between South Africa and Botswana, and turned up the riverbed to head north to our next overnight camp. The bird life is incredible in this part of the desert. The park supports 214 species, of which 75 are resident and the rest nomadic, entering the area when conditions are suitable. Luckily, the conditions were wonderful for bird watching, and we could add many spottings to our list. Of the larger birds, kori bustards abound, always marching in pairs, as well as the near-endemic Ludwig's bustards and northern black, as well as Karoo korhaan, Burchell's sandgrouse and Namaqua sandgrouse gather in large numbers at the waterholes, flying in to swoop water into their chest feathers and chirping their distinctive call, “Look at me!” We watched a secretary bird stalk over to have a bath in the water after it had chased a jackal with its wings spread wide.

And what a privilege to spot four cheetahs feeding on a very recent kill. Again, the vultures hovered and jackals circled.

Much of the wild game is concentrated along the riverbed, where there are man-made waterholes, and the road follows the twists and turns of the river, so travelers are able to observe many special behaviors from nearby wildlife.

It was on one of these oxbows that we came across a black-backed jackal and her pup not 30 meters from our car. As we stopped to watch, she turned on the pup and snapped and growled at him, at which he sat back on his hindquarters with his ears back, much like a puppy at dog-training when told to “Stay!” She then trotted off for about 400 meters, scanning the veld for anything strange. Even though we were at such close range to her pup, she ignored us completely. At the top of the dune, she turned and signaled, and the pup went bounding up to her. They rubbed noses and trotted off. 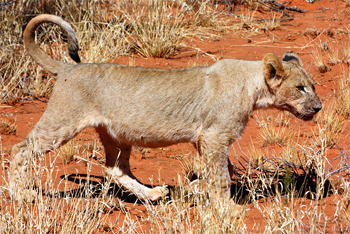 Further upriver, we were alerted to a lioness prowling along the top of a dune, roaring and grunting constantly. She cast up and down the dune for about a kilometer and finally sat down quietly under a tree. We watched noiselessly, curious. A couple of minutes later, she bounced up and shot down the dune to cross the road in front of us. From the other side of the road through the grass came three lion cubs. They had been lost, and she had called out to find them. It was amazing to see such a joyous reunion, with each of the cubs rubbing noses with her and then all of them disappearing off into the grass.

After spending the afternoon watching the desert life go on around us, we headed to our home for the night: Bitterwasser Camp. The tented camp accommodates eight people and is built on a dune overlooking a dry plain in a truly beautiful setting. To sit around a roaring fire under a pitch-black sky etched with a trillion stars, enjoying a meal with wonderful friends is a memorable experience.

The next morning, we ventured out once more into the desert. And as is typical in this part of Africa, we saw oryx by the thousands! These majestic animals stand out so magnificently against the Kalahari landscape and leave spoor etched in lacy patterns as they cross the dunes to and fro. Springbok are plentiful, as well, and ostriches dance in circles to a tune only they can hear. It’s amazing to see all species together at a waterhole, totally oblivious of the well-fed lions lounging nearby in the sun. We found a pearl-spotted owlet hiding in a camel thorn tree, and all around, crimson-breasted shrikes streaked through the bush and ant-eating chats dive-bombed their prey from dizzying heights.

Our third night was spent at Kalahari Tented Camp, near the Mata Mata border post, situated on dunes overlooking the Auob River. We enjoyed another peaceful African sunset around a fire gazing out over herds of wildebeest and springbok grazing in the riverbed. To sleep in such absolute silence is a wondrous thing. Now and again, the night would be split by a jackal calling, a hyena cackling, nightjars hooting.

It was hard to leave this tranquil corner of the world, to head slowly back into civilization. But the Kgalagadi had worked its magic and we were replenished and ready to face another week.