The Power of Plants in Urban Pollution Reduction 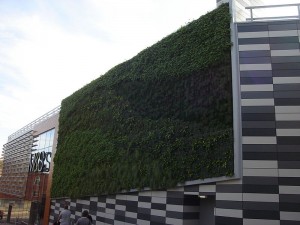 A new study in the American Chemical Society journal Environmental Science and Technology suggests that greenery such as trees and bushes in cities plays a larger role in reducing pollution levels than previously believed.

The study conducted by The American Chemical Society, a nonprofit organization chartered by the U.S. Congress, concluded that plant life placed in urban street canyons (areas at street level where the air can become stagnant) can reduce the concentration of nitrogen dioxide (NO2) levels at street level by 40% and microscopic particulate matter (PM) by 60%.Previous studies have suggested small improvements in air quality levels.

Tall buildings made up of concrete and glass create urban canyons causing stagnant air to linger on top of the streets. The air sitting in these areas is where people are exposed to the highest levels of pollution such as the NO2 created by the burning of fossil fuels and particulate matter emitted by power plants, industries and automobiles. Exposure to these pollutants can cause health problems such as infections and decreased functioning of the heart and lungs.

Both pollutants, particulates and NO2, are deposited onto surfaces at varying rates depending on the type of surface. The rates of deposit on hard, built surfaces are much slower than vegetation deposit rates. Researchers found that more vegetation equals higher deposit levels of the pollutants, which then reduces the concentrations of the pollutants in the air. This means that planting vegetation, such as climbing ivy, creates an urban pollutant filter that improves the street-level air quality in compact urban areas.

In addition, the authors of the study suggest that one way to provide more vegetation in these areas is to build plant covered “green billboards.” Companies in other countries are already experimenting with this idea.

For example, Coca-Cola and the WWF for Nature partnered together to create a 60×60 foot plant covered billboard in the Philippines. The board is made up of 3,600 recycled coke bottles filled with Fukien tea plants. Anthony Gao, a botanist who worked on the billboard, says that the Fukien tea plant is known for it’s ability to absorb air pollutants. Each plant can absorb up to 13 pounds of carbon dioxide from the atmosphere (a total of 46,800 pounds a year). This alleviates air pollution in its proximate area.

The study concludes that whether on a single street or in a city sized area, adding more vegetation can result in less air pollution, even if the traffic sources are removed from the city centers.

Additional Information On This Study:

The Most Important Tool For Cutting Urban Pollution