The Return of Eastern Elk 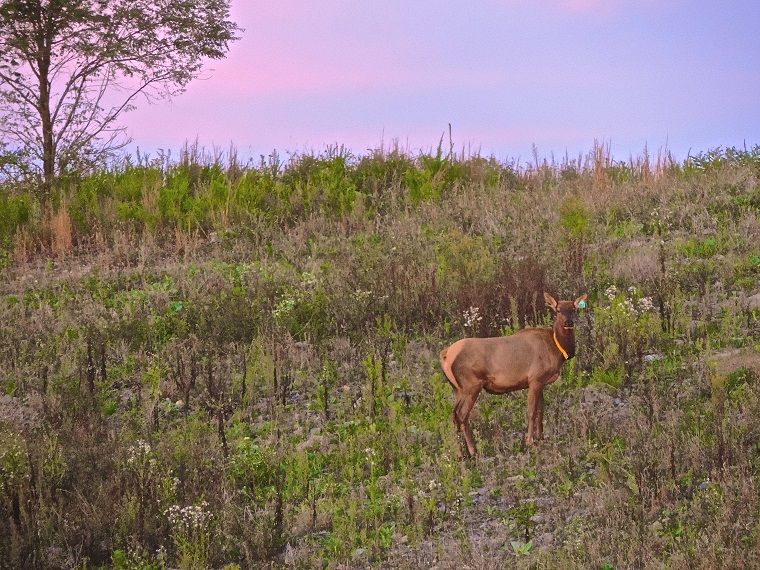 An elk in the Virginia reintroduction program. Photo by Walter Smith.

“Elk are not the first animals that come to mind when thinking of native Appalachian wildlife, but the species was a common sight in these hills prior to European settlement,” writes Dr. Walter Smith in a V4B post for National Geographic Voices. A combination of hunting pressure and habitat loss eventually caused their local extinction: the last elk was killed in North Carolina in the late 1700s, and the Tennessee population only made it through the mid-1800s. However, 20th-century visitors and locals alike are looking forward to a resurgence of elk populations.

Elk reintroduction programs have been ongoing since the end of the 1990s. One famous example remains the reintroduction of elk into Great Smoky Mountains National Park. In 2001, 25 elk arrived from land near the Tennessee-Kentucky border; another 27 began their National Park lives in 2002. Today, they remain a strong attraction for enthusiastic wildlife viewers from around the country.

Dr. Smith describes a unique reintroduction program in Virginia: “The coalfields of the Appalachian Plateau in the state’s southwesternmost corner [were] targeted for restoration efforts.” The open nature of the landscape, which is surrounded by forests, provides excellent habitat for the elk and, since no one can farm or graze livestock there, there is little competition for the space.

“It might take generations,” Dr. Smith writes, “but elk once again becoming a common sight across these mountains seems to be a question of when more than if.”

New elk reintroduction efforts are underway in other states. In December of 2016, 24 elk were released in West Virginia (also on area within a reclaimed coal mine). The program is so popular that the governor attended and was quoted in an ABC News article as saying: “To have the elk population here for people to come and enjoy, I think it’s putting the land to good use.”