The Whales of Husavik, Iceland 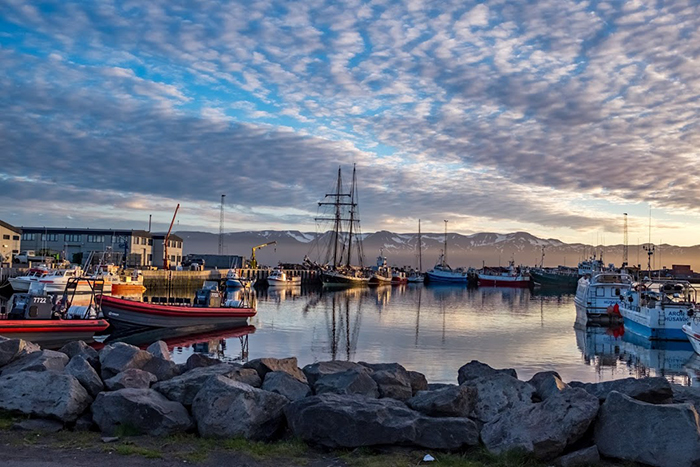 There is a small town in northern Iceland that describes itself as Europe’s best whale-watching destination. I traveled there in August 2016 to conduct research for my master’s thesis — I wanted to interview Husavik locals to better understand the dynamics of the community and uncover their perceptions of the role whale ecotourism plays for Iceland and its whales. I was both nervous and thrilled about the exploration opportunities ahead of me.

As anonymity was a condition of my research for Duke University, the names of the interviewees mentioned in this article have been withheld.

My research trip began with an hour-long drive from Akureyri to Husavik on an incredible winding road through high elevation landscapes and craggy overlooks. Husavik is opposite a large fjord, past many sprawling farms and streams. At times, the landscape is nestled under a dense blanket of fog where the lowlands meet the sea. It seems otherworldly and remote, yet there is a unique magic where the rivers empty into Skjalfandi Bay. The river system is strongly tied to the mythology of the area, and some believe the nutrients pouring into the bay are what spark the local food chain into life.

Upon arrival in Husavik, a local described the town and nearby bodies of water to me:

I think the two rivers are probably doing something really special to the bay. It’s facing the Arctic Circle, so in the summer you have 24 hours of light shining on the bay. It’s creating the perfect conditions for everything to grow and for the animals to come here to feed.

The town lives up to its reputation. The bay is known for its abundant sea life and is the summer feeding ground for 11 different species of whale. Many who work on the bay recognize individual whales who return year after year. The whales are even given names and affectionately acknowledged when spotted on the tour boats. The guides report that sightings have increased, and many who conduct research out in the bay suggest that more whales could be migrating to the area to feed, especially humpback whales.

The town’s reputation as a top whale-watching destination is not only apparent by the large number of sightings, but also by the town’s infrastructure. There are life-sized whale murals painted on many of the buildings. The harbor is at the base of a gradually slopping hill and is home to four whale watching companies. 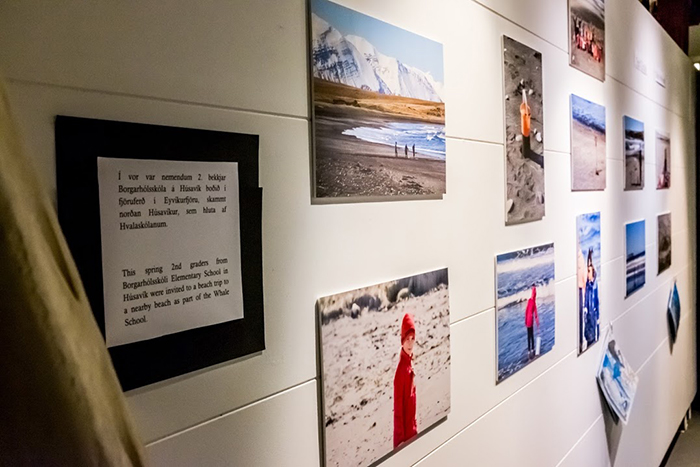 The Husavik Academic Center, which houses the Whale Research Center, borders the harbor. The Husavik Whale Museum next door is in a repurposed slaughterhouse and features incredible displays, including full-sized whale skeletons, helpful infographics on whale ecology and an exhibit on the history of Iceland’s relationship with whales.

The museum also runs the Whale School for local children. Kids in the program have their artwork proudly displayed throughout the museum. There are readings from Herman Melville’s classic book, Moby Dick, which are later discussed in class and interpreted through artwork. The children are also invited out on whale watching boats to see the whales firsthand. A native to Husavik said that a lack of connection to the water had made most people in the town unaware that there were even whales out in the bay, and acknowledged that the Whale School’s program is an important step in educating the local people.

Iceland’s whale watching industry is in a unique position because the country has been whaling on an industrial scale since the early 1900s. There was a ban in the 80s that lasted 20 years. By the time whaling resumed, the demand for whale meat had greatly diminished. One resident described this lack of interest:

“People I knew who were brought up eating whale meat never eat it anymore. The whole foodscape of Iceland has changed big time and one of the things that has gone out is whale. So I think it’s probably more to do with that, because I don’t think that Icelanders are very much against the whaling per se.”

Food availability has broadened throughout the country and people have access to a wider array of globally sourced meat. Today, Icelandic whale meat is largely consumed by tourists and through exports sent to Japan. A campaign called IceWhale has been working to reduce this demand. They also set up a code of conduct for responsible whale watching etiquette aimed at Iceland’s whale watching companies.

Three of the four companies in Husavik had adopted this code when I had arrived. The town is no longer serving whale meat in local restaurants either; the companies that own many of these restaurants serve locally caught fish from the bay instead. Their families have been fishing here for generations and they are proudly carrying on these traditions. There is a common misconception throughout Iceland, especially within fishing towns, that whales decimate available fish stocks. This has incentivized whale hunts to continue along the coastline simply to reduce their numbers. Until recently, many who weren’t actively out on the water were unaware that whales were common in Icelandic waters. 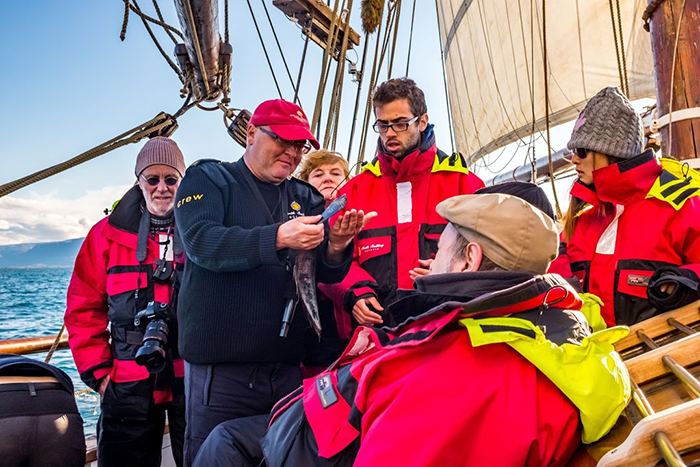 The first whale watching company in Husavik was created by a local fisherman with deep ties to the ecology of Skjalfandi Bay. After earning a science degree, he returned to Husavik with a renewed sense of place, and began bringing others out on the water to enjoy the beauty of the local landscapes and the diversity of sea life out on the bay. He was able to bridge this gap between the whales and fisherman in Husavik, while also staying true to tradition. Passionate about restoring the area’s classic fishing vessels, which were largely abandoned for newer and faster models, he utilized traditional boats for whale watching tours, lending a rustic and authentic character to the industry.

Whales are very important to the town’s economy, and the Whale School tries to educate locals about the ecological importance of whales within the bay and promote their conservation there. One person explained:

“I don’t think that the people in Husavik realize how important the whales are to their community. I think that’s the main thing about it, because the whales are very important. We get maybe 100,000 people every year coming to Husavik to go whale watching and there are about 2,000 people living here. This is a huge financial input into this little community, but most people just live their lives out here. They don’t think about the whales.”

I asked those within the whale watching community about the potential impacts on the whales because of the industry. The majority responded that due to the sheer number of tour boats out on the water, there are concerns. One of the researchers explained that the presence of tour boats on the water can disrupt feeding behavior in certain situations. Globally, faster boats have been known to accidentally strike whales in locations where boat traffic is high, causing terrible injuries and even premature death.

The researchers and captains I interviewed offered suggestions to reduce these impacts, including limiting boat traffic, reducing speeds to prevent collisions, and minimizing disturbances to the daily feeding and socialization of the whales (largely through observing their behavior while respecting their space). These changes are suggested through IceWhale’s guidelines that three of Husavik’s companies have already adopted. Those I talked with seemed committed to this responsibility.

When I asked individuals to compare whale watching with other wildlife experiences, one resident offered:

“Even though one might say that it’s consuming nature, culture exists as a tool of analyzing and it’s very useful. I think the Whale Museum and whale-watching industry are making the community here aware of the connection they have lost between the town and the sea, especially for the children.”

As we continue to lose species, future generations may only be able to experience these iconic parts of nature through media records. Most of those I interviewed feel that seeing whales in their natural environment helps people connect with the whales’ lives out in the ocean. With that awareness, people may be more inclined toward conserving them.

Every individual I spoke to felt that the industry plays an important role in educating others about whales and provides a valuable experience that can’t be matched in a marine park or through pictures. The locals demonstrated compassion for nature, and most expressed hope that future generations can respectfully experience whales in their natural habitat.

It was heart-warming to talk with these individuals about how they ended up working in Husavik. Most have the common thread of seeing a whale out in the wild, experiences that changed their lives forever. My own life was shaped by just such an experience when I was young. I went whale watching for the first time when I was twelve and I still remember it vividly — the temperature of the air, the smell of the ocean. Most of all, I remember that moment when a pod of orcas approached our tour boat. It was incredibly grounding and their presence hit me in such an unexpected way as they dove under us. I’ll never forget how I felt — in that moment, I was struck by how real these incredible creatures actually were.

For more information on whale watching tours, check out: