Johnny Rodrigues, Chairman of the Zimbabwe Conservation Task Force (ZCTF), is a key figure in Zimbabwean wildlife conservation. Despite the heroic labels that have been ascribed to his actions, Rodrigues remains humble. He is diligent in his work, placing mission before anything else—a sign of his devotion to his cause. His correspondence is unassuming, his newsletters are straightforward and his website is continually populated with updates from the field. His online presence and advocacy are just part of his work; in the field, Rodrigues actively combats threats to Zimbabwe’s wildlife—even when that means putting his own life at risk. 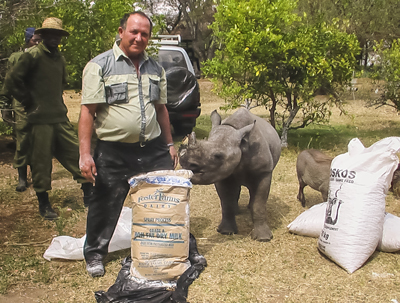 Formed in 2001, the ZCTF is a consortium that emerged to assist the Zimbabwean National Parks system by providing anti-poaching patrols and helping to raise funds for maintaining the boats and vehicles needed for these patrols in Zimbabwe’s Kariba district. The committee consisted of representatives from a variety of organizations including Zambezi National Park, the Zimbabwe Tourism Association, the National Anglers’ Union, the Kariba International Tiger Fishing Tournament and the Professional Hunters Association.

In the early years of the ZCTF, Rodrigues explains, “I saved many animals from death by moving them to safer areas. In 2005, Hwange National Park was on the verge of collapse. There was no water in the watering holes, and only one vehicle (was) operational. If you don't know Hwange National Park, it's huge—about the size of Wales in the U.K. I raised funds and spent the next 18 months purchasing fuel and spares for the water pumps and the vehicles. I managed to get most of the pumps working again, and the vehicles back on the road.”

As Rodrigues became more involved, it became evident that a number of large poaching rings were tied to the Zimbabwean government and ZNP itself. The committee quickly became unpopular; Rodrigues and his colleagues found themselves in even more danger than they had anticipated. The ZCTF team dwindled in numbers and Rodrigues was warned that if he entered any national park he would be shot.

In 2002, conservation activist Charlie Hewat—who was given the media label “Rhino Girl” for her role in protecting African rhinoceros species—called Rodrigues.

“She told me that ‘war veterans’ had invaded Gourlays Ranch, a black rhino conservancy that runs a breeding program. The vets were threatening to take over the ranch. When I arrived there were about 200 rabid war vets, all drunk, and causing a lot of trouble. They told the owners of the ranch to leave the next morning or they would be killed.”

The war veterans took possession of the black rhino conservancy. With emotion, Rodrigues adds, “I was so angry about the injustice of all this, not to mention the inevitable fate of the rhino, that I decided to do everything in my power to preserve what was left of the wildlife.”

President Robert Mugabe’s land reforms have had catastrophic effects on Zimbabwe's wildlife. Prior to 2000, there were approximately 240 ranches with wildlife, 84 of which were registered as official wildlife areas by the Zimbabwean National Parks service. Today, there are fewer than 20 remaining.

To show the damage being done to individual species, Rodrigues uses the black rhino as an example: “There were 40 in Matusadonna before 2000 and now there are only 8 left. In the Midlands conservancy, there were 50 and now there are 21. In Gourlays Ranch, 26 of the original 48 were relocated to a safer area and the rest have been slaughtered. We estimate, from the reports and statistics received, that we have lost between 90 and 100 percent of the wildlife on private game ranches, 60 to 70 percent on the larger conservancies and about 40 percent in the National Parks game reserves.”

Rodrigues envisions a future for Zimbabwe where people and wildlife are able to achieve harmony. “When government ministers decide they want a certain piece of land, they evict all the Africans who had been living there for decades, leaving them homeless … I believe that if the rural folk were given title deeds to the land surrounding, and adjacent to, wildlife areas, they could become stakeholders in the tourism industry.” In this scenario, the locals could be entrusted to look after the wildlife and carry out their own anti-poaching patrols, and then receive a share of the revenue generated by tourism. Rodrigues concludes that “it would then be more profitable for them to preserve the wildlife than to kill it.”

Rodrigues and his team hope that rising public interest in conservation, spurred by events such as the shooting of Cecil the Lion, will have long-lasting positive effects, and that it will encourage the international community to take a tougher stance on fighting against Zimbabwe’s neglect of its wildlife. The future of Zimbabwe’s wildlife hangs in the balance and, without imminent local and international support and backing, that future will be bleak.

Poached elephant hides spotted on a pickup at a local gas station.

To get involved and to see what you can do to help, please visit the Zimbabwe Conservation Task Force.

All photos courtesy of the Zimbabwe Conservation Task Force.