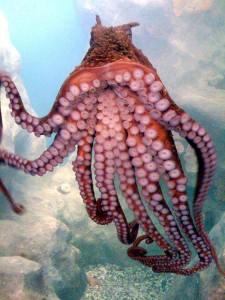 The solitary and elusive Giant Pacific octopus, found in coastal waters of the North Pacific, holds the title of largest and longest-lived of the octopus species. The largest Pacific octopus on record weighed 600 pounds, but on average these octopuses weigh from 22 to 110 pounds. They have a lifespan of three to five years.  The Pacific octopus’s habitat ranges from the southern California coast to Alaska, the Aleutian Islands and Japan, usually at a depth of about 65 meters.

Like other octopuses, the Pacific octopus uses its ability to camouflage itself to both stalk prey and hide from predators. The Pacific octopus is nocturnal and hunts at night for fish, clams, and shrimp but has been known to eat fish, sharks and even birds on occasion.

Study of the giant Pacific octopuses in captivity has proven that these are highly intelligent animals, capable of learning to open jars, solving mazes in lab tests, and learning to solve problems by mimicking other octopuses. However, little is known about the Pacific octopus in the wild.

Historically, scientists struggled with tagging and tracking cephalopods in the wild because of a lack of solid body parts to attach tracking tags to. Recently though, BBC Nature reported on a successful effort to catch and tag Pacific octopuses led by Dr. David Scheel, a researcher at Alaska Pacific University. Scheel and his team of scientists caught 40 octopuses off the coast of Alaska, and attached miniature transmitters to their gills. Scientists monitored the octopuses using the transmitters and underwater hydrophones over 20 days. 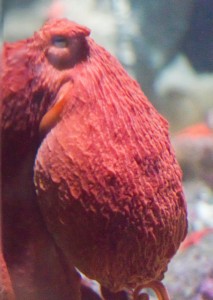 Scheel’s study concluded that the octopuses spent 94 percent of their stationary time hiding from predators, and they have a much broader range than previously thought – the larger octopuses had a range of up to 50,000 square meters. Scientist also learned that the octopuses used environmental cues, like the contour of the seafloor, to help them navigate back to their dens.

The Giant Pacific octopus is not listed as threatened or endangered, largely because its actual population size is unknown. However, they are known to be highly sensitive to polluted water. Hopefully, similar research efforts in the future will help determine what the population size of the Giant Pacific Octopus is, which environments they prefer, and eventually lead to knowledge that will help protect both this octopus and its habitat.

Watch the BBC slideshow on tracking the Pacific Octopus