When a Tourist Meets Nature: A Story from a City-Dwelling Brit 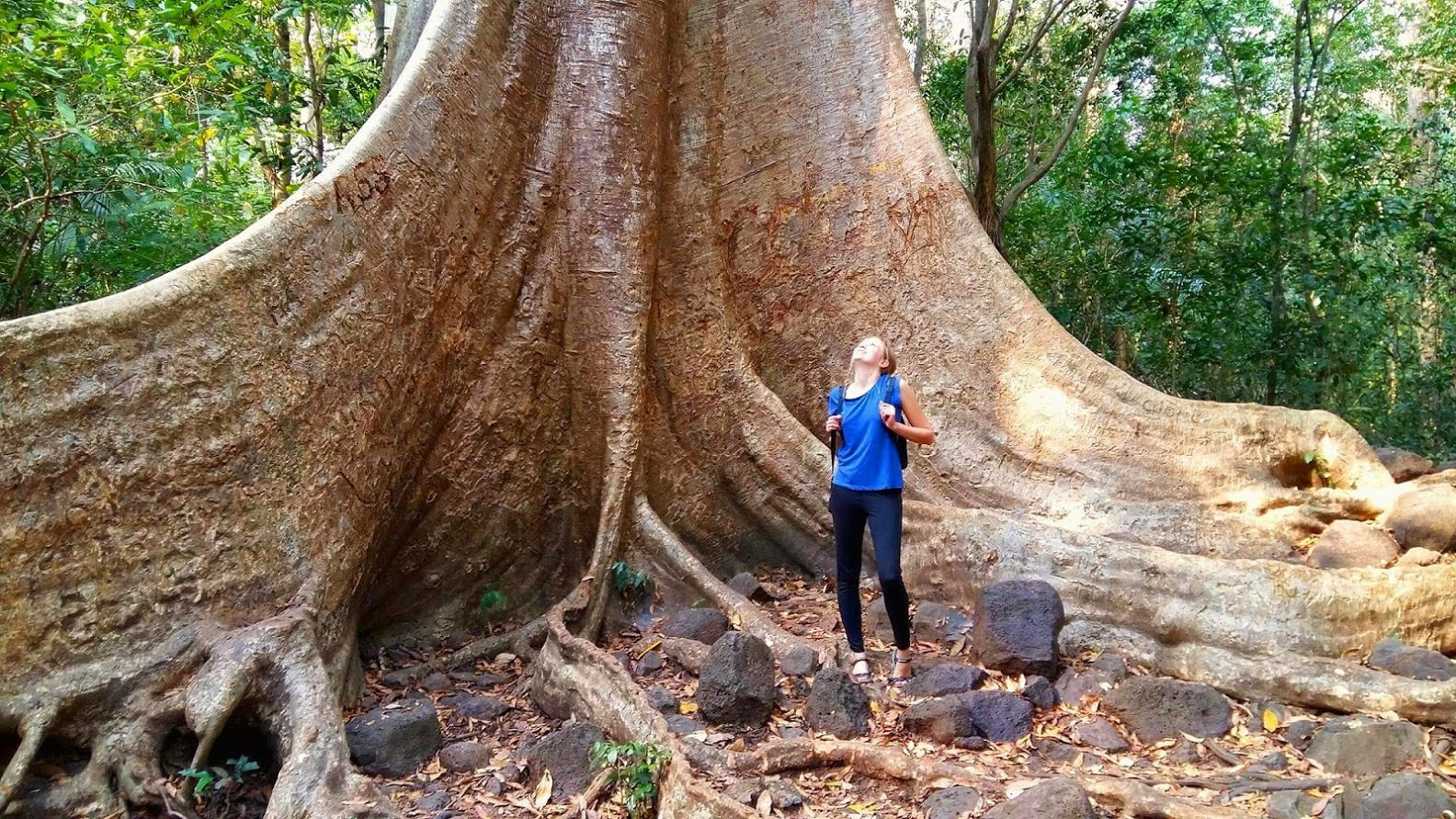 "What about there?" I point at a green patch on the computer screen. My partner and I are planning the next route of our journey through Southeast Asia. And by planning, I mean deciding one day in advance.

We had spent the last week exploring two huge, polluted cities — Bangkok and Ho Chi Minh City. Our lungs, eyes, ears and minds were screaming for rest. Four days in the middle of nowhere sounded rather appealing.

After the most grueling five-hour bus ride of my entire life, swerving and speeding among the pandemonium of motorbikes on Vietnamese highways, we arrived at the village next to the park.

We instantly knew we had come to the right place: no sounds except for the cows, chickens and wild birds, no buildings other than rural shack-like structures among the trees, air that could be called a gas rather than a liquid, the lush green jungle of the national park calling to us from across the river.

What happens to two poorly dressed, optimistic, mildly adventurous, heat-sensitive Brits when you put them in the jungle? 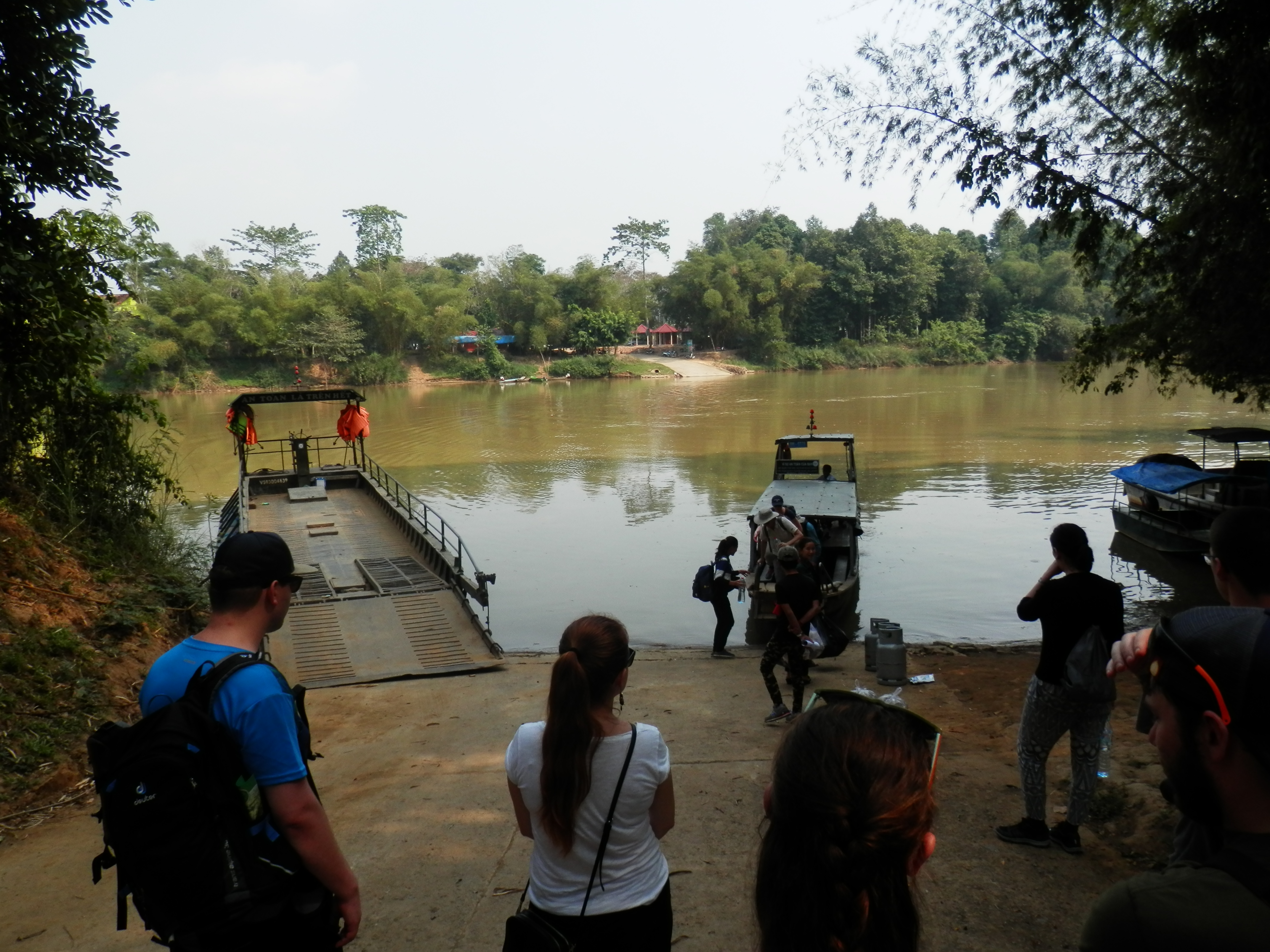 They learn more than they could have ever possibly imagined.

Hiring bikes from the visitor headquarters, we set out on the trails that were roughly outlined on a rudimentary map. The famous tung tree (Tetrameles nudiflora) was our first point of call, and it took my breath away. 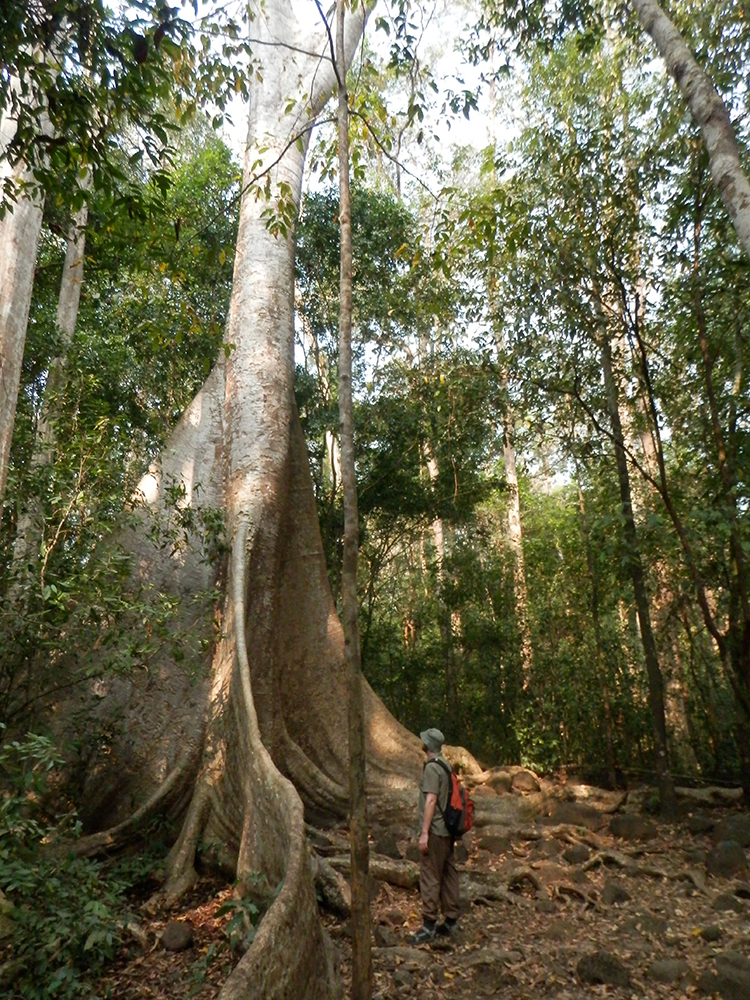 Enormous roots appeared to flow down like a waterfall from midway up a glistening white trunk, reaching above my head in vertical wall-like structures. These buttress roots had been keeping this tree upright in the shallow soil for hundreds of years.

In the 1960s, large tracts of forest were lost during the Vietnam War, when the U.S. military sprayed the park with the defoliation chemical Agent Orange. Standing in the tung tree’s magnificent shadow, I felt very glad that it had survived. At the same time, I also felt deeply saddened by the thought of how many other fantastic trees and wildlife were lost.

Continuing along, we took a moment to stop and listen to the exotic bird calls. Having no knowledge of tropical birds, every unique note and mysterious texture was like an orchestra made of instruments heard for the first time. We moved slowly as we craned our necks to spot the elusive players. Magic was in the air. Something would scuffle through the undergrowth. A sequence of tall branches would bend low and then spring back up. Who was watching us right now?

Over the next few days, we explored a variety of habitats in the park, and the inhabitants of the junglegradually revealed themselves to us.

All it took was to stop, listen carefully and look closely. 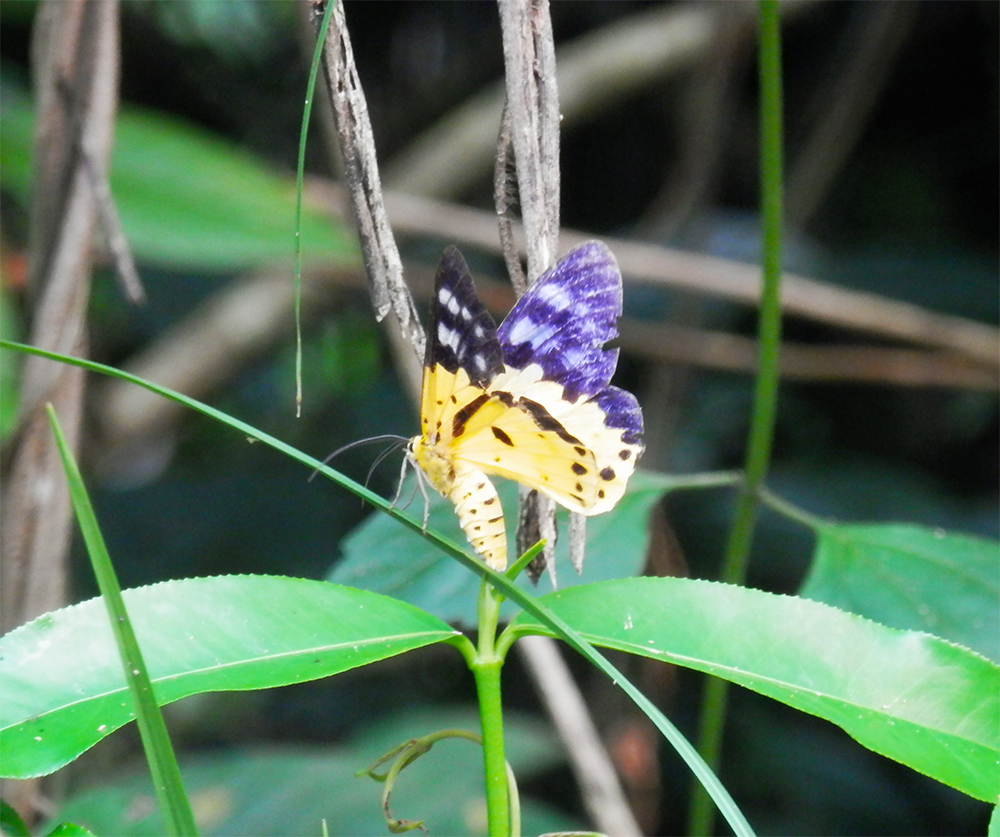 I saw a yellow and blue spotted butterfly, stretching his legs along a stem of grass. What was it that made a single wild butterfly more brilliant to behold than a hundred in a tropical butterfly house back in England? 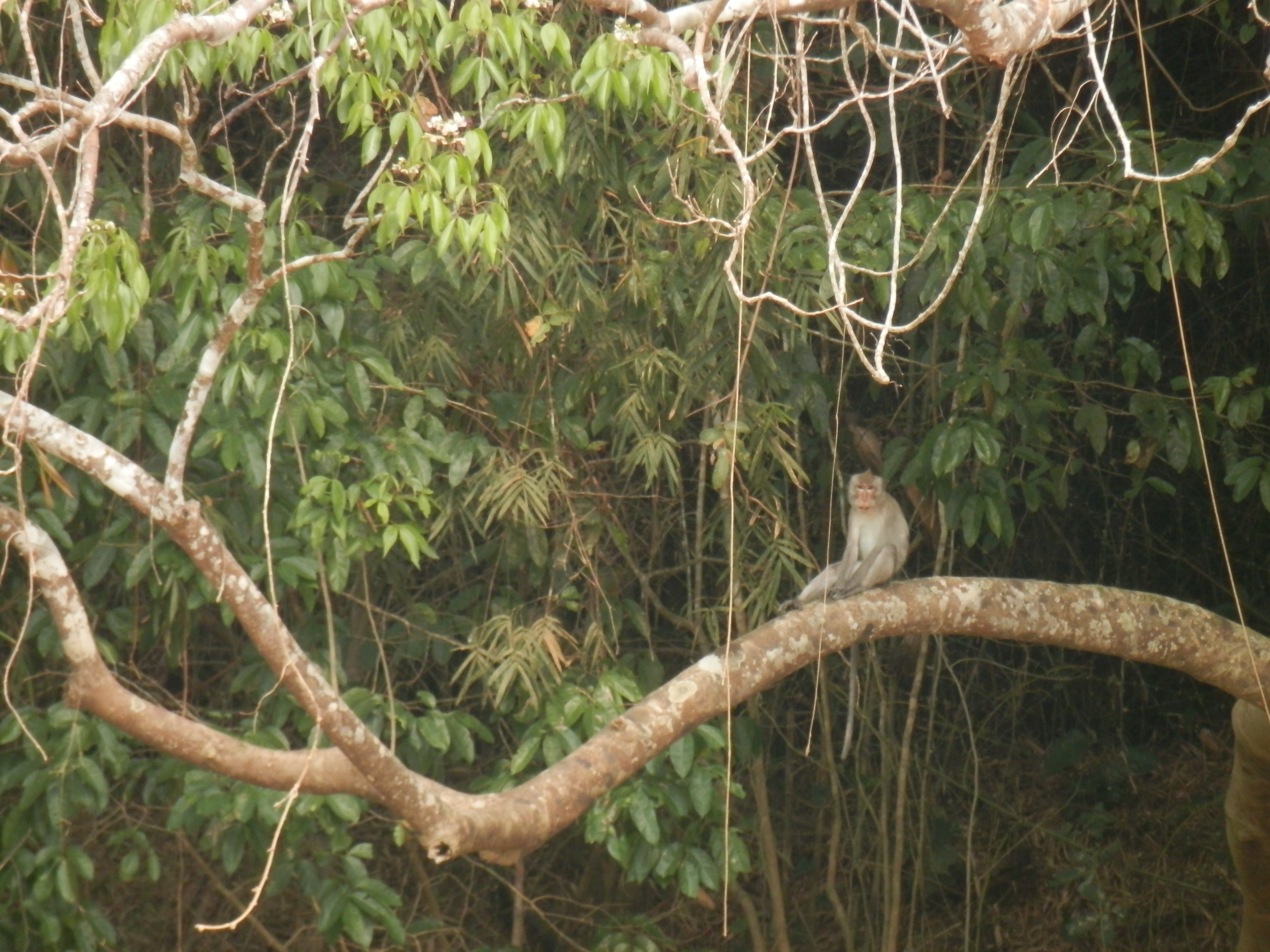 A crab-eating macaque (Macaca fascicularis) sat comfortably, watching us pass by on the ferryboat. I wondered what he thought of us. 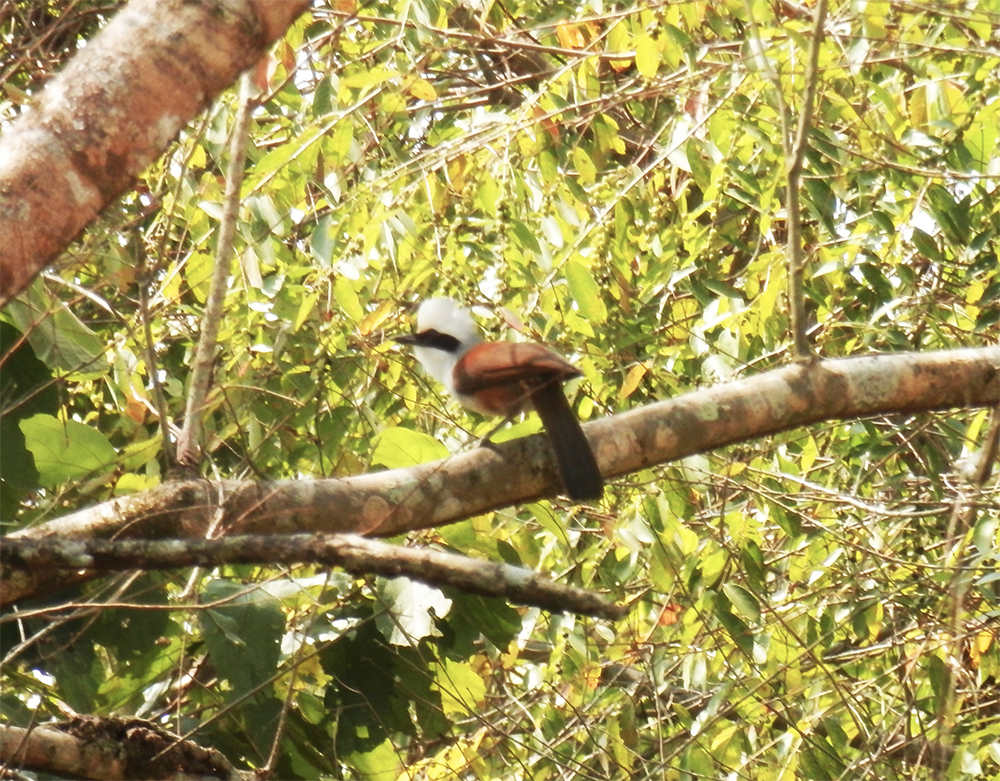 A cacophony of noise alerted us to this lively band of white-crested laughing thrushes (Garrulax leucolophus). What were they laughing about? 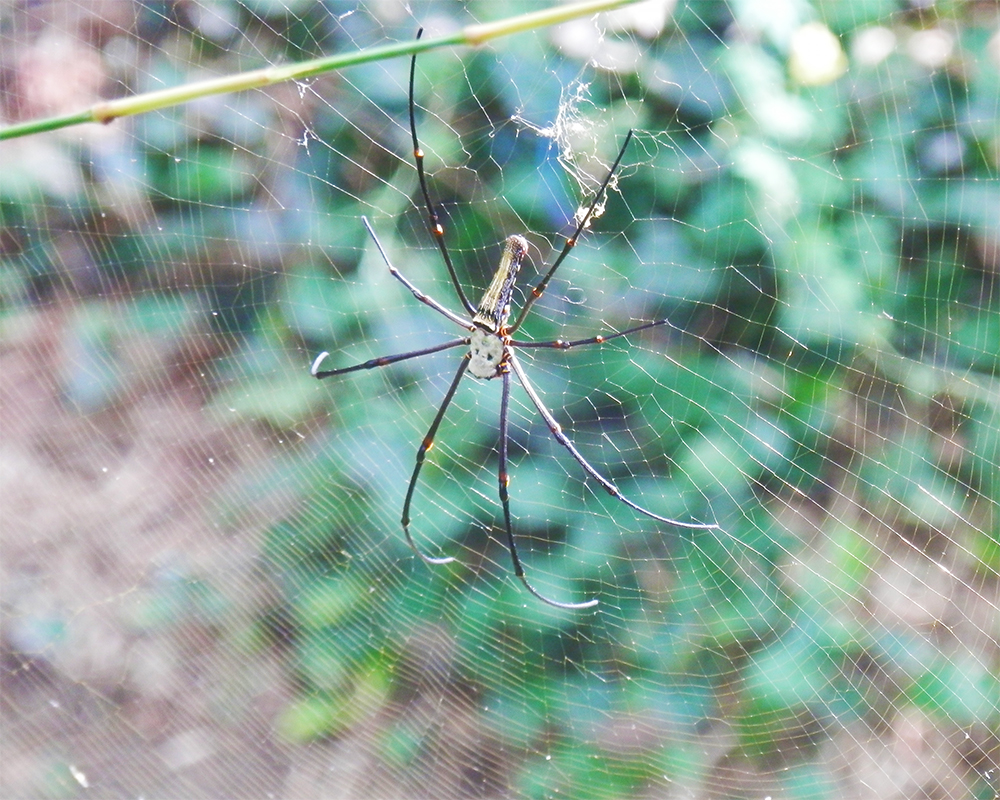 We didn't stop for long near this female giant golden orb weaver (Nephila philipes). Each of her dancing legs was longer than my finger. 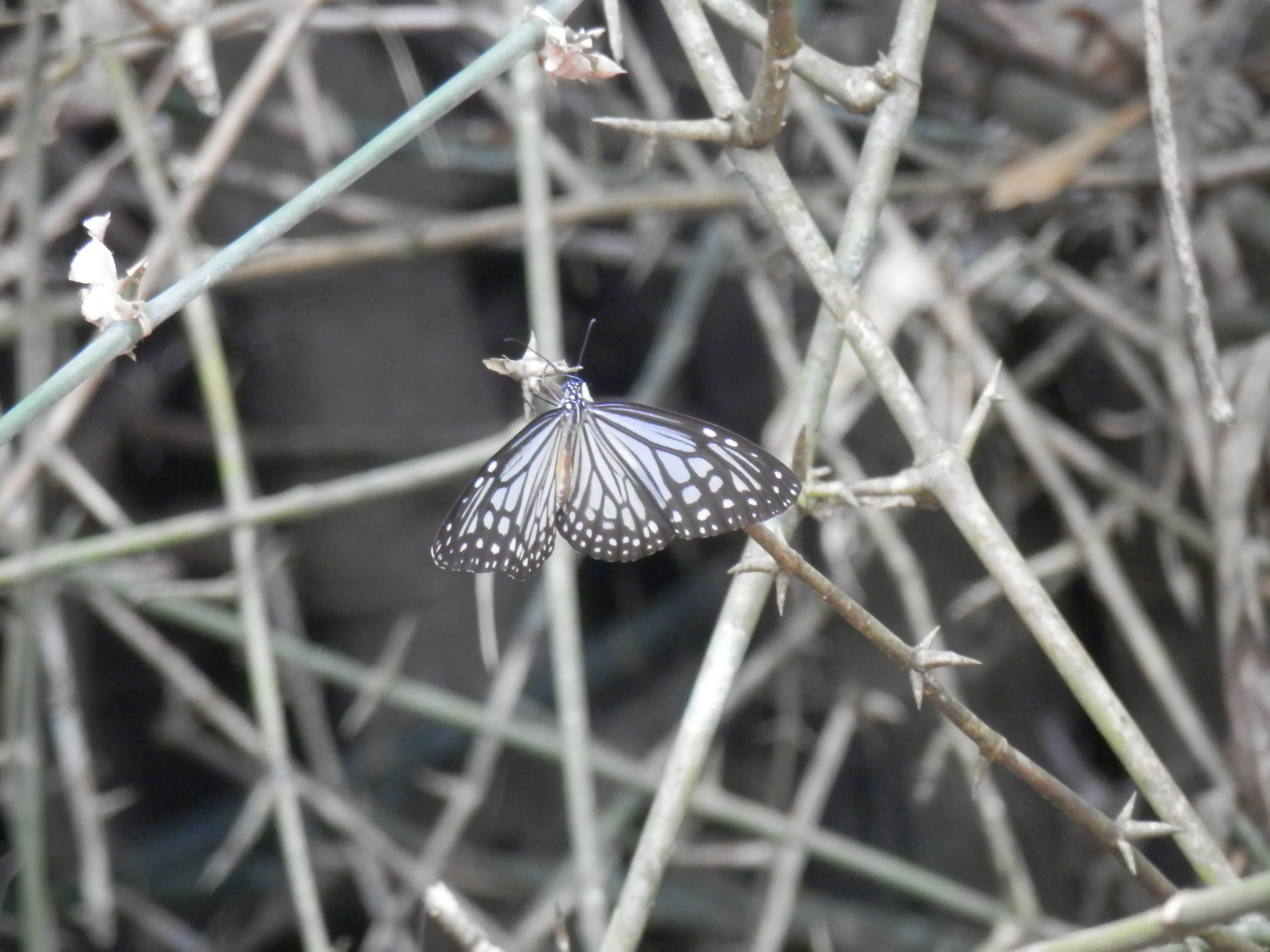 Every morning at dawn, from our little castle at Lava Rock Lodge, we heard gibbons singing to each other across the park. They made a symphony of sounds I can only describe as an emergency siren mixed with overexcited college students playing drinking games. They sing to defend their territory, warding off other gibbons with the intimidating strength of their calls.

Having not yet seen any with our own eyes, we were overjoyed that this beautiful mother gibbon and her daughter came to visit us near HQ, swinging right over our heads to snack on the spiders between the building frames. 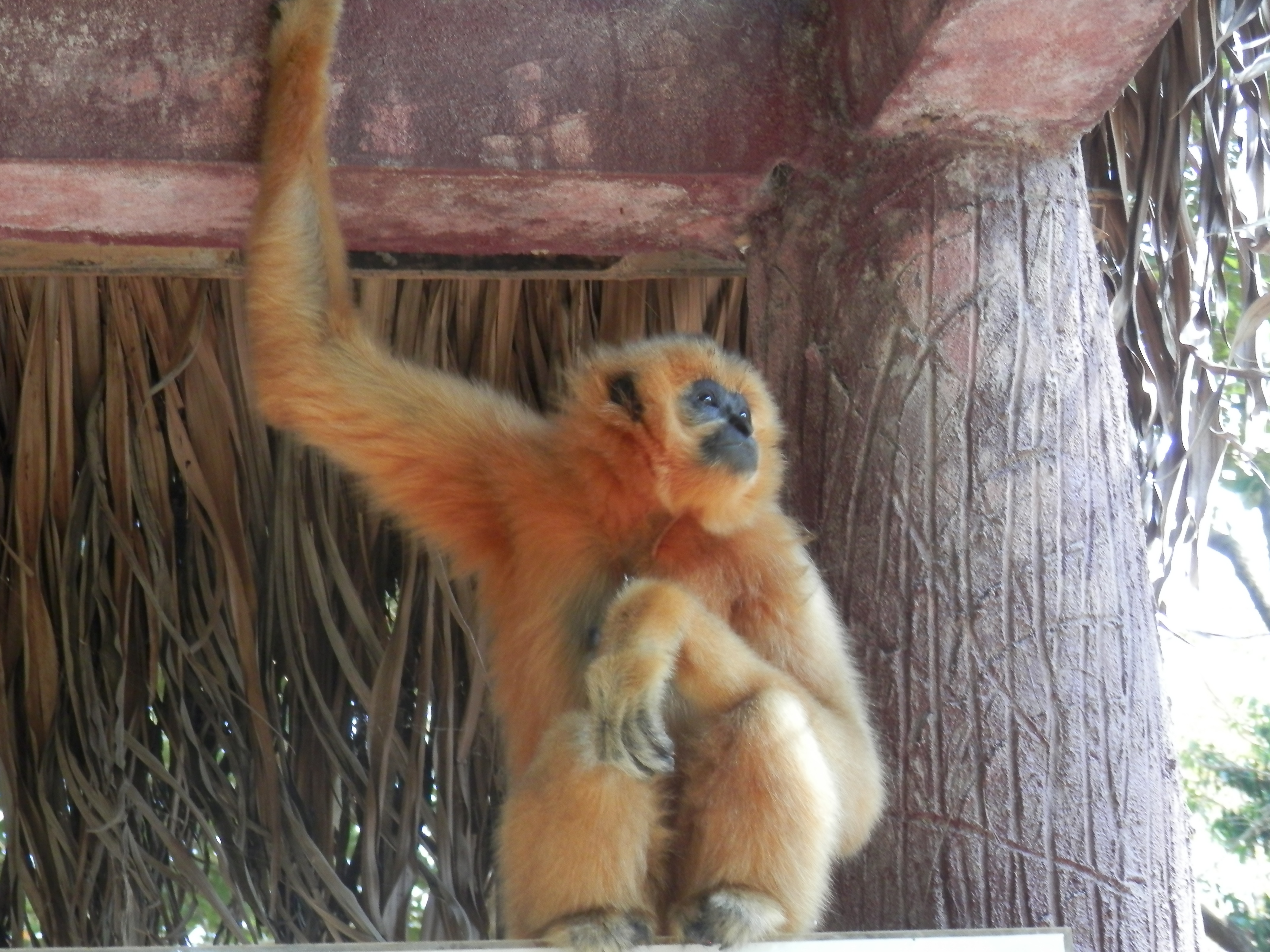 These gibbons had been rescued from the tourist industry, rehabilitated at the Dao Tien Endangered Primate Species Centre and released into the park. I’ll be writing about my experience at the centre in my next article, as well as the reason these two particular gibbons were getting unusually close!

I was simply astounded by how many species we had seen, without even taking a guided tour. A giant antlered sambar deer crossed the track in front of us, and butterflies of all colors and sizes would fly up with every step. It was like a fantasy movie.

This was the original Vietnamese community, in all its wild glory; the natural environment itself contains more museums, galleries, monuments and inhabitants than could ever be found in a city. There was fresh air in my lungs, unfiltered sunlight on my skin and beauty all aroundme. I wondered if fate had guided me here — to a place I hadn’t realized I needed so much.

However, thanks to the grip of global capitalism, it was sad to learn that this park was still far from a wildlife oasis. Conservation efforts were up against increasing population pressures, pollution of the waterways, agricultural encroachment and poaching. The last Javan rhino (also known as the Sunda rhinoceros) in the world went extinct here in 2010, with the pull of a trigger. Every week primates, monkeys, birds and bears are taken from the forest to be used in the tourist trade or for natural medicine.

It was interesting to me that even though this was the high season for tourism, there couldn’t have been more than 50 visitors in this park of almost 180,000 acres. It simply wasn’t on the tourist trail through Vietnam. I wondered, if every backpacker came here, what secrets could we bring back to the rest of society?

That all creatures belong in the wild and not in cages?

That blossoming biodiversity is more valuable than any booming business?

That life lived simply can be the richest of all?

I have always known that the natural world must be honored and cared for if we are to survive as a species. Our current path of consumption is not sustainable, or healthy, and its effects on humanity are materializing before our very eyes. When we destroy nature, we destroy ourselves. 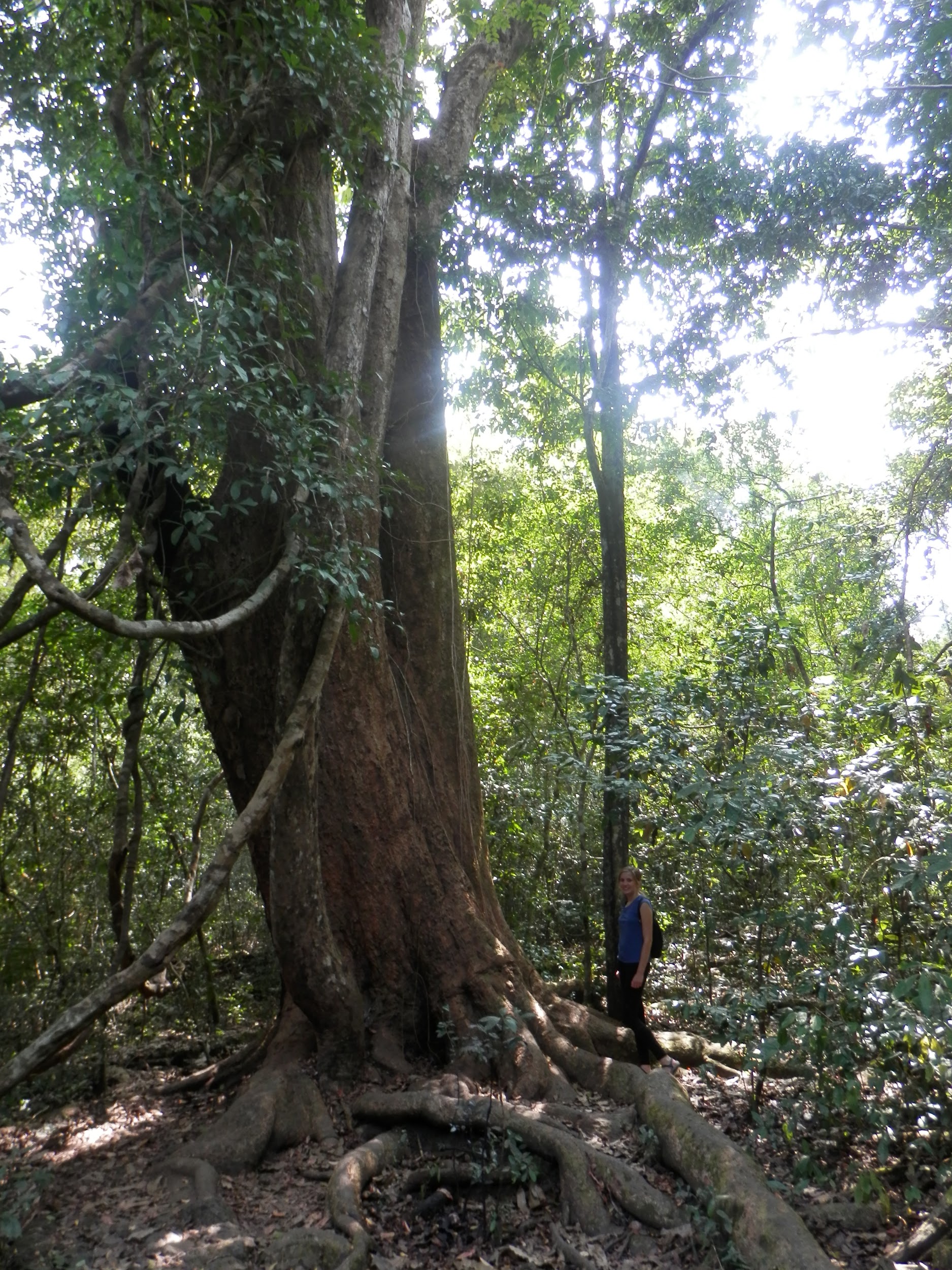 And yet my visit to Cát Tiên made me recognize my lived experience of being disconnected and then reconnected with nature. Unlike the British wildlife I had taken for granted, the wildlife here was new and unlike anything I had ever seen. It was enough to break me out of my previous mindset. It gave me a deeper understanding of what must be preserved, a new respect for life and renewed energy to speak out on behalf of nature.

I believe that connection with nature is one of the most important reasons for conservation and tourism in national parks such as Cát Tiên. We must preserve and coordinate our experiences of nature as the key to our collective awakening and restoration on a much bigger scale.

Moreover, we must preserve as many species as possible so that when humanity finally changes its destructive ways, there will actually be some biodiversity left to maintain healthy ecosystems.

Four days spent simply absorbing nature made me feel incredibly alive, in a very present state of mind, and aware that there something much bigger is going on when we reconnect. It reaffirmed to me how much we stand to lose with our present way of living. And it allowed me to begin to understand how much humanity could gain if we learned to live on behalf of nature.