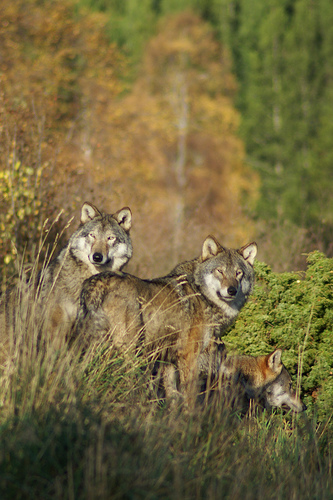 WASHINGTON, DC—The Idaho Department of Fish and Game plans to implement aerial hunting of wolves this year, using federal funds to support the culling. The ultimate goal of this plan is not to effectively manage wolf populations – as they hope to leave as few as 25 wolves in the Lolo District of Clearwater National Forest – but to boost elk and other game numbers for hunters and outfitters.

These hunts will incorporate low-level helicopter flights, which are not only risky for both humans and animals, but are also extremely expensive. How does the state of Idaho plan to find the funding for these vicious attacks on Idaho wildlife? With your tax dollars, of course, says the wildlife conservation organization Defenders of Wildlife.

Idaho has asked for additional federal money to support these anti-wolf management practices, which could go into effect as soon as weather in Northern Idaho permits. If proven successful at destroying wolf populations and increasing wild game herds, Idaho plans to ask for even more funding for aerial hunting in other national forests and federal lands throughout the state. The Game and Fish Commission is also exploring reclassifying the wolf as a predator and enacting a shoot-on-site policy similar to the controversial law in neighboring Wyoming.

Defenders of Wildlife is asking wolf supporters across the United States to ask President Obama to reject the proposal to send funding to Idaho for these hunts. They implore the president to keep his promise to put science and scientific research first when it comes to natural resources management.

To find out how you can help, please visit Defenders of Wildlife.