The beam of a flashlight gleams through a small opening. The triangle of light looks like it’s coming through a window on a dark evening, but it is actually a gap between the buttress roots of an ancient mountain ash tree. I step down through a doorway-sized opening and push in among the press of people, breathing in the thick, earthy smell of the tree’s interior. Headlamps illuminate clouds of flies disturbed by our entrance and catch the eye-shine of spiders tucked into the bark. I look up into the towering trunk above, but the light of my flashlight is swallowed by the darkness. 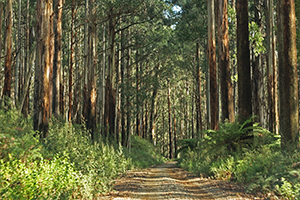 We are inside what is known as the 30-Person Tree (although the last time it was tested, it had the capacity for 36). It is nearly 9 p.m. in November 2016, the beginning of the Australian summer, and I am on a spotlight tour of the Toolangi State Forest with volunteers from WOTCH: Wildlife of the Central Highlands. Organized to celebrate the launch of a sculpture trail in the forest, the tour is an opportunity for members of the public to learn about the wildlife of the forest and WOTCH’s work to protect it.

It begins with the trees. South-eastern Australia’s mountain ash tree, Eucalyptus regnans, is the tallest flowering plant in the world. It can grow to a height of almost 100 meters and has a life cycle that spans centuries.

One of its most crucial roles in the forest is creating nesting sites for marsupials. It takes approximately 120 to 150 years for the trees to reach maturity and provide hollows that are habitable. After nearly two human lifetimes here in Toolangi, a mountain ash tree is ready to give shelter to the faunal emblem of the state of Victoria: the Leadbeater’s possum. 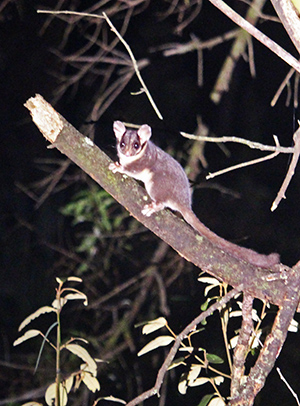 Also known as the fairy possum, the Leadbeater’s possum is a tiny tree-dwelling marsupial that weighs no more than 165 grams at maturity and has a tail almost as long as its body. By the 1950s the species was believed to be extinct, but it was amazingly rediscovered in 1961. Still on the brink, the Leadbeater’s possum is now listed as critically endangered. Estimates place the population at around 3,000 animals, but, despite a captive breeding program, their numbers are believed to be in steep decline.

Leadbeater’s possums rely on large, old, hollow-bearing trees for their survival. After the forest was decimated by the Black Saturday bushfires of 2009, the suitable pockets of habitat for these marsupials grew smaller and farther apart. An ongoing cycle of logging and fire continues to exacerbate the fragmentation. Leadbeater’s possums are almost entirely absent in areas that have been burned, making the preservation of viable stands of habitat vitally important.

That’s where WOTCH comes in. Following the Black Saturday fires, Toolangi locals Trent and Vikki Patten became concerned about the continued logging of the surviving forest and its repercussions for vulnerable species. They invited a group from the Deakin University Enviro Club to come to the forest and learn about its wildlife.

From there, a passionate group of students began surveying the logging coupes (in this region, the term “coupes” describe areas that have just been logged or are earmarked for logging) in search of threatened species under the guidance of Trent and Vikki. In 2014, their efforts were incorporated as WOTCH.

At WOTCH’s public event last November, we took turns sweeping powerful flashlights through the trees, scanning the canopy for eye-shines and flickers of movement. A volunteer with a thermal imaging camera in hand urged me to take a look. The tangled red web on the screen looked like a line drawing of the bush beyond, although, when I looked over the camera into the darkness, everything was indistinct. On the screen, the volunteer indicated a brighter spot of red on a branch: a sleeping bird. Right beside us all of this time, undisturbed by our footfalls, utterly invisible without the aid of this technology.

There was some excitement up ahead: voices rising and flashlights converging on one spot. I joined the crowd and followed an outstretched finger to the bright spot in the canopy where everyone was focused. I picked out the swing of a tail, a slight movement high above that I would never have noticed alone. A camera with a powerful flash was trained on the spot, and we crowded around the screen to see the result. A greater glider, the volunteer identified. The mystery was solved, yet we all continued watching that distant tail swinging, enraptured. 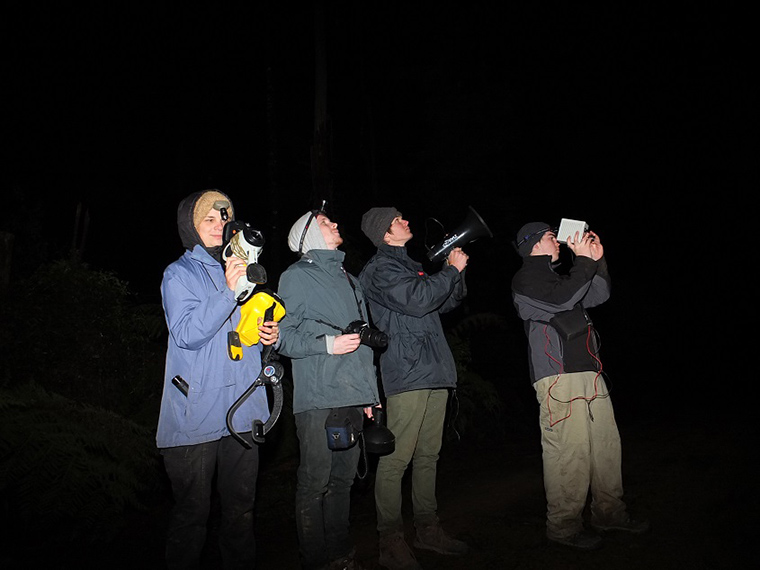 Between animal sightings, I spoke to several members of the WOTCH team about their goals. “WOTCH’s mission has evolved over time,” one volunteer, Tegan, explains. “Initially [it began] with a few passionate individuals who wanted to record a collection of images, videos and accounts of wildlife sighted within logging coupes of the Central Highlands before the logging destroyed their habitat. Since then we have evolved to actively survey for wildlife within the Central Highlands, using scientific methods to try to protect our native forests from unsustainable logging.”

No longer just a group of determined students, today WOTCH’s volunteers come from backgrounds as diverse as farm work, retail and bushland management. They range in age from early 20s to early 50s. “We all have different tasks that utilize our strengths,” explains volunteer Jake. Some people have expertise in social media engagement and community presentations, while others prefer to focus on fieldwork.

“Only a couple of our core members are living in the Yarra Valley area,” he tells me. “The rest are required to drive from anywhere between an hour to two and a half hours to get to these forests that the Leadbeater’s possum calls home. Not all of our surveyors live close to these forests, but we are all local in the state of Victoria, and it is our responsibility to do all we can to protect our great faunal emblem.”

During the day, the group could be surveying the forest in search of likely habitat for the Leadbeater’s possum, assessing which areas are likely to be felled next, and writing up reports to send through to the Department of Environment, Land, Water and Planning (DELWP) in Victoria. 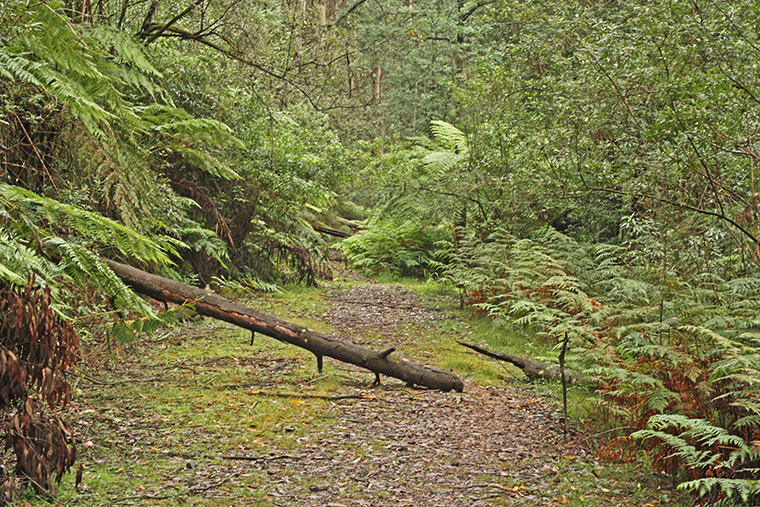 By night, the work of WOTCH has a direct, immediate impact on the forest. Because of its endangered status, seeing even a single Leadbeater’s possum in an area means that part of the coupe cannot be logged. Volunteer Blake tells me the story of one particularly successful night’s surveying.

“‘The first, and perhaps most notable, Leadbeater’s possum detection [of 2016] occurred on the 18th of April, along the majestic Yea Link Road in the Toolangi State Forest. Historically, it has been known to host colonies of the critically endangered Leadbeater's possum, and is therefore a crucial patch of forest for which the species is reliant upon.

“WOTCH was appalled when one day the access onto Yea Link Road was blocked . . . The mountain ash forest of the Imperium logging coupe would soon be clearfelled. In a desperate attempt to save this extraordinary patch of forest, we embraced the sundown and geared up to survey the Imperium logging coupe one last time. We spent the night of April 17 scanning the coupe with a thermal imaging camera in the hope of detecting the elusive Leadbeater’s possum.

“The night came and went, and the early hours of April the 18th soon followed. Still there were no signs of Leadbeater’s possum . . . We were ready to call it a night and, just as we were about to leave, we gave the darkness one last scan with the thermal camera. As our spotlight unveiled the darkness, we were delighted to discover that we were being observed by a Leadbeater’s possum.

“In a combination of shock and excitement, we frantically pulled out the video camera and began to film the critically endangered possum within the Imperium logging coupe.

“Once the appropriate evidence had been obtained, we rushed out of the forest to construct an official report of Leadbeater’s possum detection. We typed up the report as the sun was rising . . . Upon submitting the report to DELWP in the early hours of the morning, and with some political push from a likeminded Victorian MP, we were able to halt the logging process before it commenced. The Imperium logging coupe had been saved for now.”

The dedication of WOTCH volunteers has already had a positive effect on the forest they care so deeply about. As Emma Chessell explains, “Our survey work has a very direct impact on forest protection. For each official Leadbeater’s possum sighting, a 200 meter buffer of forest is reserved as habitat. Our surveys in 2016 protected over 1,000 hectares of prime Leadbeater’s habitat in this way. This supports other species as well, because the hollows and connected understory used by Leadbeater’s possums also support many other species.

“WOTCH is a citizen science group,” Emma continues. “[Our] regular nighttime surveys are building up some valuable longitudinal data about forest species — not just the critically endangered Leadbeater’s, but also yellow-bellied gliders and greater gliders, and even more common species like mountain brushtail possums. This is valuable for non-citizen scientists, who are starting to work more closely with our group.”

Back to that November night, our tour group settled down on logs, grass and the gravel road to sit quietly and listen. A volunteer surprised us all by mimicking the haunting call of a female Leadbeater’s possum, his voice echoing in the treetops. We waited, ears straining in the silence, but there was no answer. As we found our way back to where the cars were parked, we heard a rustling. All eyes turned upward to a mountain brushtail possum who sat eating on a branch above a minibus, unperturbed by the audience.

To the last moment of our tour, the volunteers were scanning our surroundings with flashlights and the thermal imaging camera. When the tour group piled back into their vehicles at 11 p.m., the volunteer guides waved us off — their night of surveying was just beginning.

Emma tells me WOTCH’s hopes for the future of Toolangi: “We want to see these forests managed in a way that is consistent with what science tells us is required for their survival. For example, scientists have determined that Leadbeater’s possums require more territory than the 200-meter buffer that colonies are currently afforded to survive. The best advice is that they require a one-kilometer buffer of territory for nesting, foraging and social requirements. So not only are regulations not being enacted without volunteer intervention, but the current regulations are not adequate.

“We want to see that changed,” Emma says. “We want to see forests valued and managed in line with the evidence. That will mean a total revision of our approach to forest use in the Central Highlands.”

A movement is underway to see those forests recognized as a national park. It’s a project that can count David Attenborough and Jane Goodall among its advocates, and it’s a dream that WOTCH shares. Emma adds, “We look forward to the day when our surveys will be conducted within the Great Forest National Park — and we will help manage the crowds of tourists that will want to visit these forests when they realize what is up here!”

All photos are owned by WOTCH, and cannot be used or reproduced without permission.